Design a site like this with WordPress.com
Get started

MICHAEL:
Join us.
Our own Haitian Revolution up in here.
TOUSSAINT.

Toussaint is known as the Black Napolean, he took charge during the slave revolt in Haiti turning it into the Haitian Revolution against the French. “He helped transform the slave insurgency into a revolutionary movement. By 1800 Saint-Domingue, the most prosperous French slave colony of the time, had become the first free colonial society to have explicitly rejected race as the basis of social ranking.” (wikipedia) 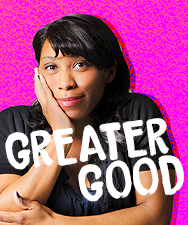 Supported by the Mellon Foundation and HowlRound. GREATER GOOD is a C1 PlayLab project.